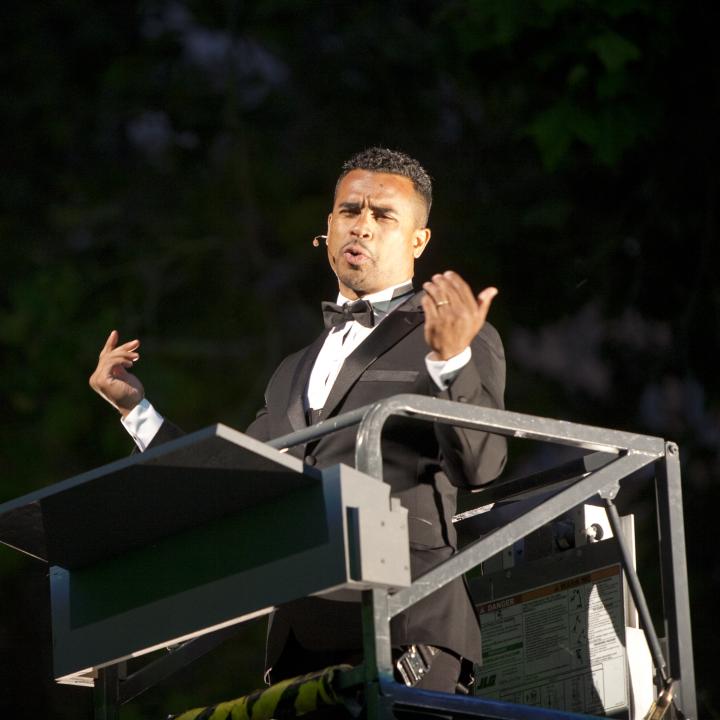 Shaun Leonardo works in drawing, painting, and performance. Through his artistic practice he interrogates "hyper-masculine figures" ranging from athletes to superheroes and explores the influence they have on shaping ideas of manhood. Leonardo's work often focuses on childhood role models, popular icons and cultural stereotypes and how they influence our perception of what it means to be a man. In his paintings, on cut out plywood, he isolates the figures in an effort to amplify feelings of exclusion, isolation, and invisibility. Leonardo has received grants, residencies and fellowships from the New York Foundations for the Arts, Skowhegan School of Painting and Sculpture, The New York Studio School, Lower Manhattan Cultural Council, Art Matters, McColl Center for Visual Art. Leonardo's work has been exhibited nationally and internationally, including at the Brooklyn Museum of Art, LACMA, Yerba Buena Center for the Arts, The Walker Art Center, Studio Museum in Harlem, Contemporary Arts Museum Houston,and Museo de la Ciudad de Mexico. Shaun Leonardo's work has been featured in The New York Times, The Boston Globe, ArtForum, The New Yorker, Interview, The Village Voice, MoMA Ps1, and PAPERMAG.

The Eulogy, commissioned for the San Francisco presentation of Radical Presence, takes Ralph Ellison’s 1952 novel Invisible Man as its starting point. As Leonardo performs the speech given by the novel’s narrator at Brother Clifton’s funeral, a local brass marching band performs a routine that mimics the impact of the speech, interweaving the artist’s words with choreographed moments of confusion and disorder. These words serve as a memorial, a rejection, a challenge, and call to action, all at once.