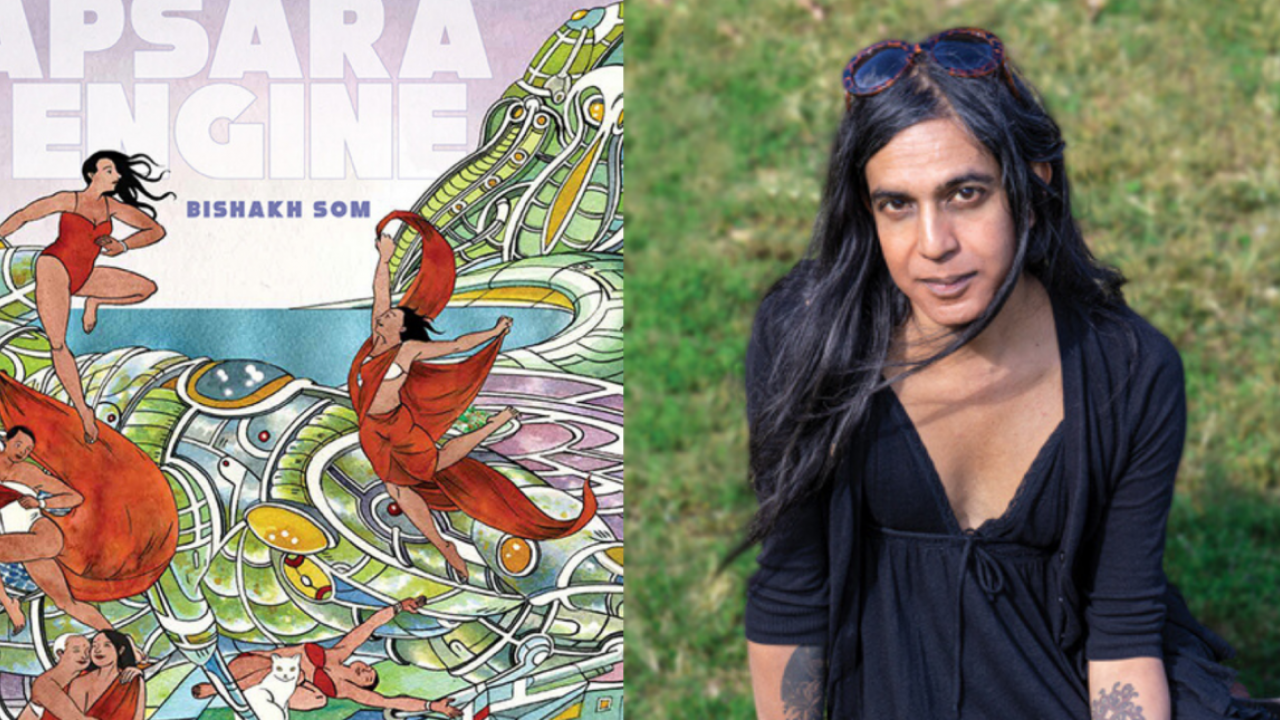 The eight delightfully eerie stories in Apsara Engine are a subtle intervention into everyday reality: a woman drowns herself in a past affair, a tourist chases another guest into an unforeseen past, and a nonbinary academic researches postcolonial cartography. Imagining diverse futures and rewriting old mythologies, these comics delve into strange architectures, fetishism, and heartbreak.

Painted in rich sepia-toned watercolors, Apsara Engine is Bishakh Som’s highly anticipated debut work of fiction. Showcasing a series of fraught, darkly humorous, and seemingly alien worlds—which ring all too familiar—Som captures the weight of twenty-first-century life as we hurl ourselves forward into the unknown.

Bishakh Som is the illustrator and coauthor of The Prefab Bathroom: An Architectural History, and her work has appeared in the New Yorker, Buzzfeed, and the Brooklyn Rail, among others. Her book Spellbound: A Graphic Memoir is forthcoming from Steret Noise Books in August 2020. She has also been published in We’re Still Here: An All-Trans Comics Anthology, Beyond II: The Queer Post-Apocalyptic & Urban Fantasy Comic Anthology, and many more. Som is currently based in Brooklyn, NY.

Ben Passmore is the author of the Eisner Award-nominated and Ignatz Award-winning comic Your Black Friend, a graphic letter about black alienation, the series DAYGLOAYHOLE, and a graphic novel about revolution and football called Sports is Hell. Ben likes to make comics about monsters, anarchism, sexual dysfunction, police brutality, art theory, and his feels. BTTM FDRS, a graphical novel written by Ezra Claytan Daniels and drawn by Ben, follows a young hipster in Chicago that moves into a condo that eats people.

---
Asian Arts Initiative is designed as a mobility accessible facility, with access to all public floors and spaces, and seating accommodations for programmed events. Both non-gendered and individually isolating restrooms are available on each floor, all equipped with changing stations. If contacted in advance, we will make every attempt to fulfill requests for reasonable accommodations such as vision/hearing auxiliary aids and cognitive disability guides. Please note: Due to most events being attended by the general public, we cannot guarantee accommodations for those with fragrance sensitivities. AAI is a family-friendly multigenerational space.