Block Party in the Cut 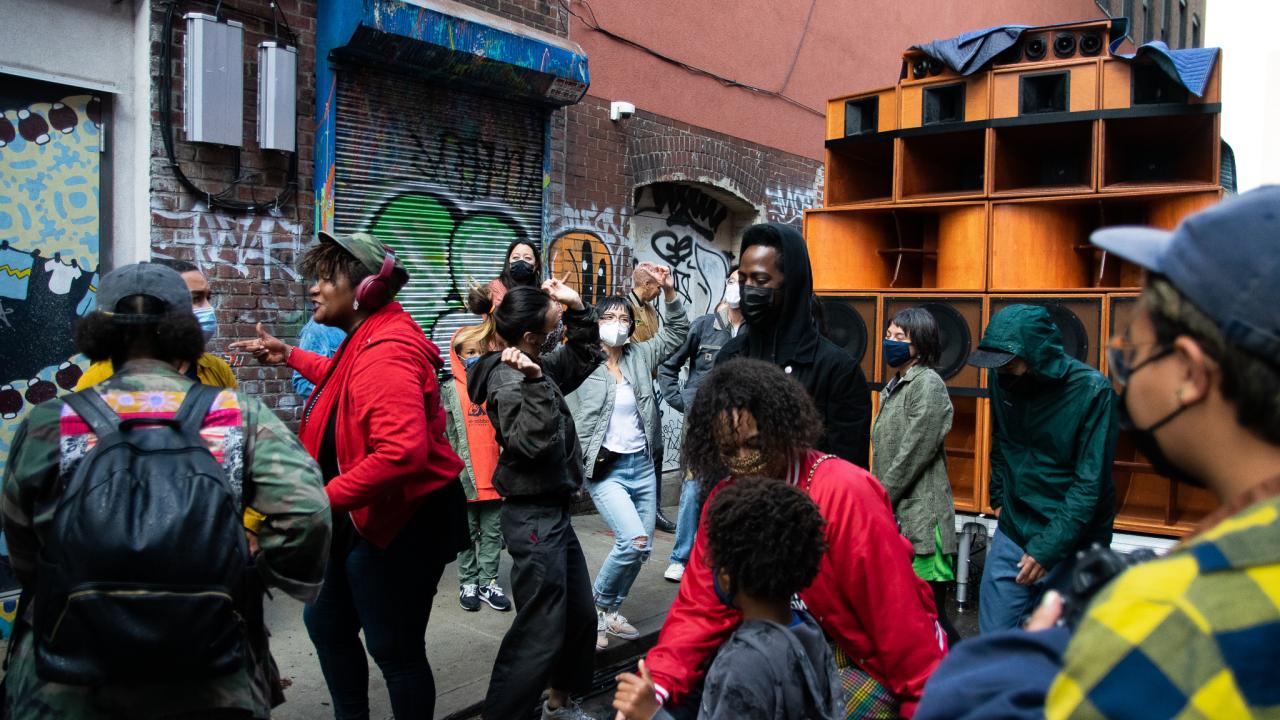 Due to the inclement weather forecast, we are moving our Block Party indoors to our building. Join us at 1219 Vine Street, 2–6PM!

On Saturday, October 1, Asian Arts Initiative's annual Block Party will bring together the community of the Callowhill/Chinatown North neighborhood to celebrate its rich diversity and creativity. In the 2022 iteration, the Block Party will mark the launch of AAI's Eco/Systems: Land Based Initiatives project. The Block Party will be an opportunity for the public to meet the lead artists, and to enjoy music, poetry, dance offerings, with local food and drinks. Join us! RSVP to the event here.

For the second year, Philadelphia Contemporary's Curator of Spoken Word Yolanda Wisher commissions three radical pairings of poets and DJs to perform hour-long sets at Asian Arts Initiative’s annual block party. The performances, based on the Love Jawns: A Mixtape podcast format, will be amplified via “The Tower of Sound,” a custom-built 15 kilowatt system created by Dub-Stuy sound system collective of Brooklyn.

Sanam Sheriff (she/they) is a queer poet and artist from Bangalore, India. She has received support from the Thomas J. Watson Fellowship, The Watering Hole, Pink Door, and The Seventh Wave. Sanam holds an MFA in Creative Writing from Washington University in St. Louis. They currently serve as a Visiting Assistant Professor at Bryn Mawr College.

With DJ roots within disco, house, new wave, and goth, Rana Ransom was a past regular at the now-defunct East Village staple Heather’s. Currently based out of Brooklyn after spending almost a decade in Philly, Rana has DJed at venues like Pyramid Club, Johnny Brenda’s and Dolphin. Apart from DJing, Rana performs noise under the name Tagine Dream and is the founder of SWANA arts nonprofit YallaPunk. Keep up with them at https://soundcloud.com/ranaransom. Photo credit: Alex Rueda.

Nina Elizabeth Ball aka Lyrispect is the Director of Programming at the African American Museum of Philadelphia. She is a cultural curator, educator, writer, producer and award-winning creative. Prior to her role at AAMP, she spent a decade as an entrepreneur while holding a sustained leadership role with the Brooklyn-based organization “BLACK GIRLS ROCK!”

Quoc Pham aka Q-Mastah is the founder of Dub-Stuy, a Brooklyn based collective and record label. Since 2006, he has performed in clubs and festivals throughout the US and abroad. In 2011, he co-produced the Dub Invasion Festival. Inspired by his multicultural background and rooted in the tradition of Jamaican sound system culture, his eclectic sets seamlessly mix Reggae, Dub, UK Steppers, Dubstep and other bass heavy genres.

Bruce Campbell Jr., Ph.D. also known as DJ Junior is a Philadelphia-based scholar, label owner, radio host, producer, and DJ. He is the owner of Record Breakin’ Music (RBM) and founded Eavesdrop Radio. He produces and hosts the Dust + Dignity podcast. As an educator and professor at Arcadia University, Dr. Campbell focuses on embedding relevant issues of diversity and social justice into his practice, scholarship, and service in the education field.

Assembled during the pandemic by Serena Hocharoen, Cookie Club is a group of 5 friends who love to talk about home cooking, family recipes, and diasporic foodways. Learning as we go, sharing intermittently and across distance, we also find occasions to throw down together. Cookie Club Philadelphia Chapter comprises Heidi Ratanavanich, Tess Wei, and Connie Yu.

The menu includes items that reflect the invasive history of the island. Puerto Rico was once a land of Taino Indians that would then be taken over by the Spanish conquest. The Spanish also brought slaves to the island turning this native land into a mix bag of Spanish and African influences. You can certainly see the influences in the food. With that said I will be offering pastelillos with the ingredients brought over to the island like pork, tomatoes, olives, pigeon peas and plantains. Amy's Pastelillos highlights one particular "fritura" (fried snack) from the island of Puerto Rico - the pastelillo - and looks to bring nostalgic and new flavors to the masses.

Led by Ashley Gripper and Sonia Galiber, Eco/Systems: Land Based Initiatives is a community-based project, meant as a temporary urban green space designed with the intent to call attention to natural land systems and plant life that give respite to urban areas. Our goal is to demonstrate how integral these passive ecosystems are in creating critical resources for community residents and passersby. In showing stages of life in the natural environment of an ignored patch of Philadelphia’s greenscaping, we also aim to demonstrate the tremendous potential of art to assist in understanding public infrastructure, the beauty of unseen corners of the city, and the role we can play as cultural producers in climate mitigation.

This event is made possible, in part, by generous funding by PNC Arts Alive.