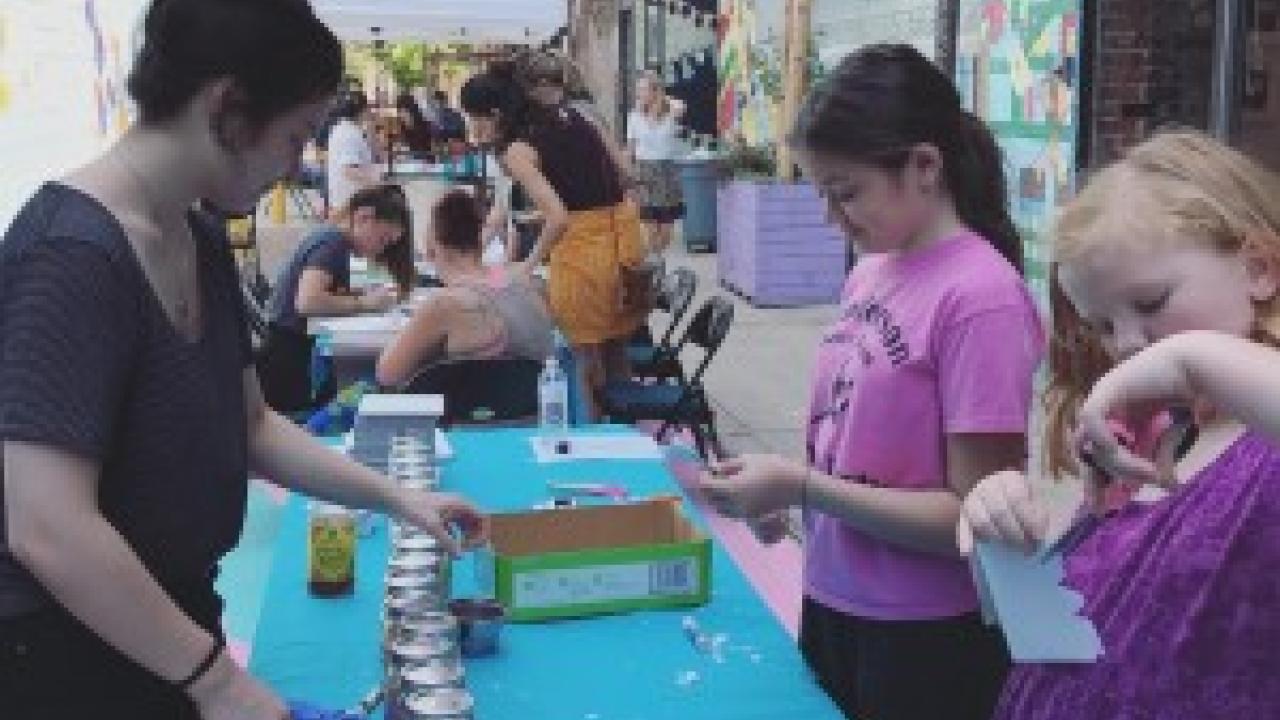 Summer weather has been slow to come, and there’s no better way to celebrate its arrival (finally!) than with an afternoon of painting, workshops, and food at Asian Arts Initiative’s 2017 Pearl Street Season Opening.

Jaiya Bhandari, who curated and presented three workshops with Emily Chow Bluck, Haley Waugh, and Mackenzie Pickaart, wanted to harness art in its ability “to create a safe space to address things that can feel unsafe.” Bhandari’s own practices as an artist and mindfulness instructor also influenced the curation of the Pearl Street micro-projects: “How can I use mindfulness in this kind of space?” she asks. “That is so powerful, especially for people who feel like they’re outsiders.”

I got to speak to two artists during the opening. Missing from this post, however, is the work of: Haley Waugh who helped participants make artwork that holistically represented themselves; Emily Chow Bluck whose participants were invited to explore tastes and scents with herbs; Mackenzie Pickaart whose participants made button pins by reverting often insidious messages in magazine advertising; Rachel Ishiwaka’s sound installation; and Aissulu Kadyrzhanova’s new pavement mural.

"Of the project’s origins", Lung said, “The inspiration for this project is from when my grandma passed away. In my cousin’s eulogy at her funeral, he said he’d never be able to taste his favorite dish that my grandma made for him, and at that moment I was like, how come no one learned to make this from Grandma?

“I think in one way it helps [Asian Americans] with connecting [intergenerationally]. One participant, her dad was really camera shy, she ended up transcribing the interview and wrote down that he said ‘It makes me really happy to know my kids love my cooking.’ In any other circumstances, he wouldn’t have said that. They’re immigrants, it’s not like he has a stable job, but the thing that made him most proud was that his kids loved his cooking.”

“Food is a cross-cultural thing where everyone can relate--everyone has that connection, even if the food is something people haven’t tasted before.”

And as she said to her boyfriend with a smile, “That’s just how my people roll.”

Neighborhood Games with Theatre of the Oppressed

Theatre of the Oppressed is a worldwide theatre group, with local chapters to promote theatrical techniques that advance social and political change. Co-Artistic Director Hariprasad Kowtha, who led two workshops in the afternoon, advances this mission while incorporating racial justice as a central piece of his workshops.

“These opportunities are opportunities to build community quickly, and to allow people to take calculated risks and create stories with ourselves,” said Kowtha. “The idea here is to warm up the body and trust each other so that we can share some deeper stories below the surface.”

When I brought up the idea of building confidence offstage in real life, Kowtha challenged my preconceptions of offstage movement that’s more “natural” than in theater. Exploring the full range of our everyday movements also requires an environment of trust, he said.

“It’s the way I invite them to my space and they invite me to their space. These are stories that are natural--it’s just that we don’t tap into the body to tell them.”

Kowtha sees connections between empowerment through these movement workshops and empowerment of Asian American voices: “A lot of times, Asian, South Asian, Southeast Asian voices  are not told or heard, especially for people who don’t have access to mainstream media or the English language.” But he adds that “the cool thing about Theatre of the Oppressed is it doesn’t require a lot of language use.”

“This is an opportunity to give people who don’t get their stories heard to tell their story.”

Making Change, One Micro-Project at a Time

For the average participant like me, Pearl Street projects are fun to join in on. For the collective effort to advance community-based artwork, these micro-projects are a macro concept.

I’m not a famous artist and have never received raving reviews for my occasional performances, but these Pearl Street activities empowered me to grow an (imperfect) artistic voice in the company of those who will help support it. As Bhandari said, “Artists aren’t just here to make something pretty. Sometimes it’s pretty. Sometimes it’s not.”

And it means that with more community-based artwork like what’s offered on Pearl Street, we all have a chance to participate in what Bhandari considers to be part of the change-making process:

“We’re here to document history, make change, show you things maybe you don’t see. When you look in history books, you look at the artwork.” 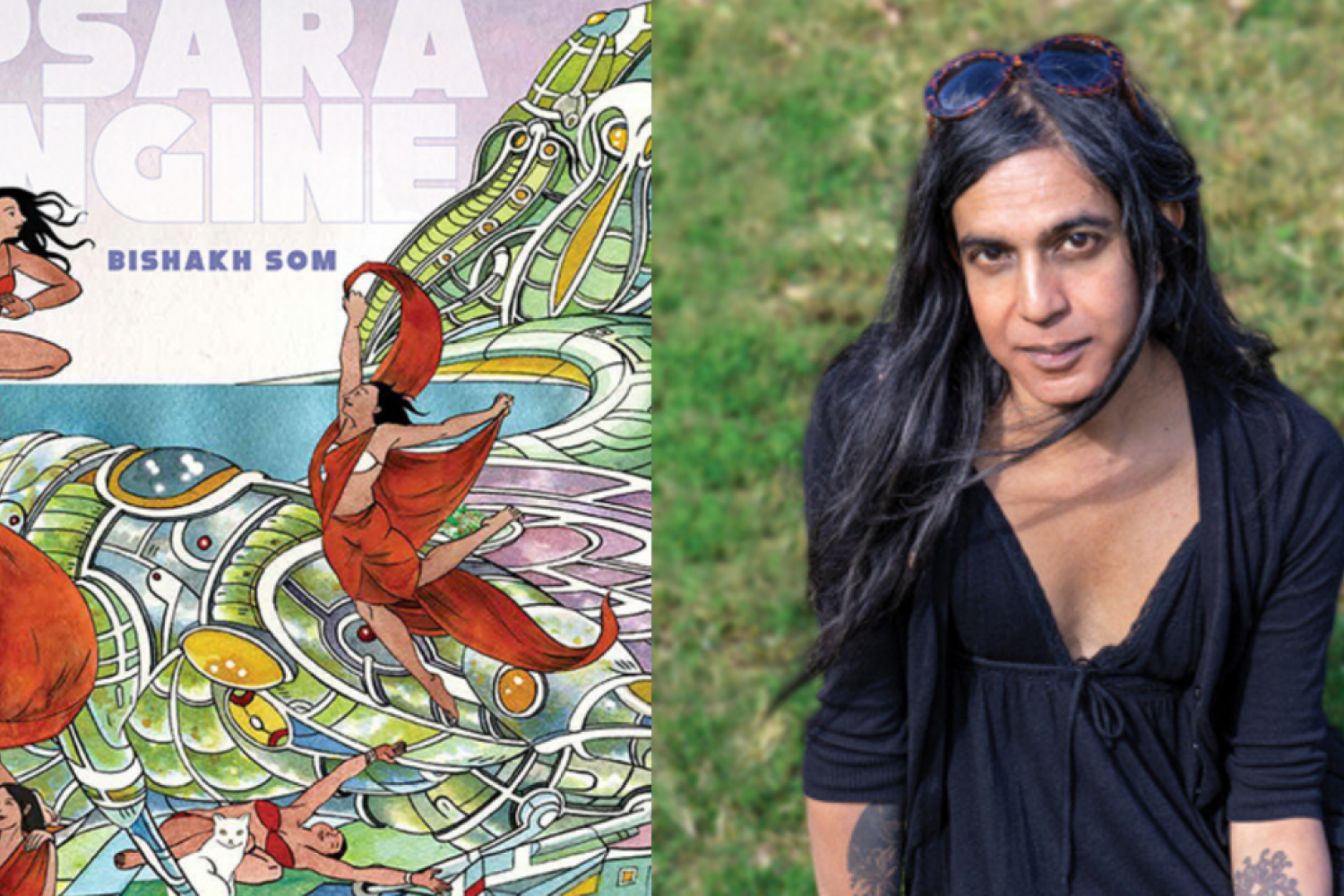